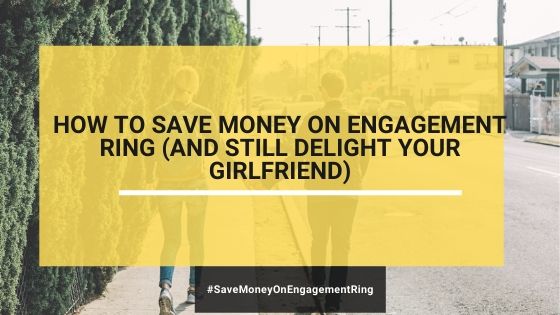 DISCLOSURE: THIS POST MAY CONSTAIN AFFILIATE LINKS,MEANING I GET A COMMISSION IF YOU DECIDE TO MAKE A PURCHASE THROUGH MY LINKS, AT NO COST TO YOU. PLEASE READ FULL DISCLOSURE HERE

If you have been doing your research on how much to spend on an engagement ring, you must have come across this “Two Months Salary Engagement Ring” rule.

I was very curious about how this 2 months salary engagement ring rule came about, so I went to ask, yes you guessed it,  Google.

Here’s what I’ve found out.

Back in the 1930s when there was depression and sales were bad, De Beers, diamond company, started a brilliant marketing campaign to convince everyone that diamonds were a symbol of true love and lifelong commitment using the famous slogan ” Diamonds are forever”.

At that time, people were told that they should spend one month salary on diamond engagement rings.

By 1980s, this rule changed to “two months salary engagement ring” (haha, I guess inflation is to blame) with this famous advertisement.

I must say that it’s really good marketing because they understand human psychology.

When it comes to love, no one would want to question the price of the ONE ring that is supposed to represent how much you love your partner.

Also, the size of the ring and the number of carats are supposed to matter.

The bigger and the more expensive engagement ring you buy, the deeper your love is for her.

On top of that, you worry that you might be judged if you buy a cheap and small-sized diamond engagement ring.

So, there is no resistance or disagreement when it is said that you should spend 2 months salary on engagement rings,

Kudos to De Beers for a successful marketing campaign.

In fact, it’s so successful that this “2 months engagement ring” rule has become the golden rule that men go by when it comes to deciding how much to spend on an engagement ring.

What is funny is that this “2 Months Engagement Ring” rule is about to become obsolete.

Below is a screenshot of questions that people are asking on Google.

That’s how I got to know about the new rule now.

I guess that inflation is really catching up fast.

Now that you know where all these rules came from, how much months of salary are you planning to spend on an engagement ring?

While you think about that, I want to share with you something interesting from my research. (Yes, I am geek)

Diamonds Are NOT Worth As Much As You Think

According to The Knot’s Study, the average spend on an engagement ring in the United States is about $5,900.

Bear in mind that this is the average spend.

First of all, I have to admit that I am not a diamond girl (yes, my husband is one lucky guy!)

Diamonds used to be a rare stone, but that is NOT the case any more after more and more diamond mines have been discovered.

But why are diamonds still so expensive?

This is because the diamond cartel, De Beers, is controlling the prices through monopoly.

By acquiring most of the newly discovered diamond mines, they can limit supply and hence maintain the high price.

So, what about diamond itself?

Can it maintain its value over time?

Unfortunately no, unless it’s a very rare diamond which means the supply is indeed limited.

For most diamond engagement rings, they start to depreciate right after you’ve bought it, kind of like cars.

If you ever want to sell it,  you won’t be able to get back even half of the price you paid for it because your diamond jeweler generally has a wholesale markup of 100% to 200%.

So, there is not much resale value left.

Now, you might say, “Gladice, I am not going to sell my engagement ring at all, so does it still matter to me?”

Okay, I hear you.

If you are okay with buying overvalued diamond rings, that’s perfectly fine.

The decision is yours.

For my husband and me, we had a very open and constructive discussion about engagement ring.

We both felt that it’s just a ring and there are many other things that we value more.

For example, we would rather spend the money on our honeymoon trip than on an overpriced engagement ring that I seldom wear.

How To Have An Open Discussion With Your Girlfriend

Should you have an open discussion with your girlfriend about engagement ring before proposing?

Isn’t wedding proposal supposed to be a surprise just like what we see in the movies?

You might ask, “Gladice, if I talked to my girlfriend about engagement rings, then there would be no surprise at all. “

I understand how you feel because we have all been conditioned to think that way.

But, just because you ask your girlfriend for her opinion on engagement ring before actually proposing DOESN’T mean that she won’t get a surprise wedding proposal.

She still doesn’t know when exactly and how exactly you are going to propose.

However, what she does know is that she will definitely get an engagement ring that she likes.

Okay, here’s another thing you should know about women.

We like it that you want to ask us what we think because it shows that you value our opinions.

Deep inside, what we really don’t want is that you buy an engagement ring that we don’t like.

So, if you decide to talk to your girlfriend about engagement ring, how do you actually start the conversation?

First of all, you need to make sure that you and your girlfriend are both on the same page about taking the relationship to the next level.

That means you’ve already talked about getting married before.

Because you want to prevent the most dreadable situation where your girlfriend doesn’t feel that you two are not there yet when you ask her to marry you.

Now, if you are ready to have the talk, what exactly do you say to your girlfriend?

Okay, here is something that you can say without making the whole thing awkward:

“Babe, there is something that I want to ask you for your opinion. Do you think you are free to talk tonight at my place?”

After your girlfriend has arrived at your place, here’s how to bring up the topic of engagement ring:

“Babe, you know that we have talked about how we wanted to start a life together. I want you to know that I am serious about what I said before. I’m actually looking for an engagement ring right now, and I really want to get one that you will like. So, can I ask you for your help on this?”

Now, what kind of questions do you need to ask your girlfriend about the engagement ring?

Here are some questions you need to ask:

If your girlfriend can show you some pictures of engagement ring styles that she loves, it would be even better.

Finally, you want to discuss the cost of the engagement ring with your girlfriend.

Don’t feel embarrassed to talk about it.

If you are going to get married, there will be many more financial decisions to be made together as a couple such as paying for the wedding and buying a house.

So, it is good to start talking about finances earlier.

If you and your future spouse feel that it’s not worth it to spend so much on an engagement ring and would rather use the money for honeymoon or your first house, here are some good alternatives to buying an expensive diamond rings.

How Much Should You Spend On Engagement Ring

Having talked about so much, how much should you spend on an engagement ring?

You don’t have to go by these baseless rules created by a jeweler’s marketing campaign.

These rules exist only because they can help them make more money, not because it will help you build a successful marriage.

So, when it comes to how much you should spend on an engagement ring, that should largely depend on your budget and also your money values and beliefs.

That means, if you are making a lot of money and want to splurge an expensive engagement ring on your girlfriend, then price should not be really a concern.

Once you find out what your girlfriend likes, then all you need to do is to find the ring that she likes.

But, if you are on a budget or you feel that it’s not worth it to spend so much on an engagement ring just like me, then you should tell your girlfriend what you really think and ask her where she stands.

A woman who really loves you won’t care about how expensive an engagement ring you will buy for her.

Just be honest with her because you want to start the lifelong journey together with her by making a big financial decision that both of you are comfortable with.

That’s to get an engagement ring that she likes and also falls within your budget.

Gladice Gong is an entrepreneur, blogger and business coach. She is passionate about sharing her ideas on business and personal finance on her blog.