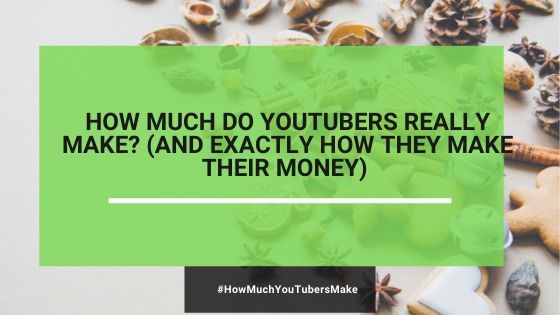 DISCLOSURE: THIS POST MAY CONSTAIN AFFILIATE LINKS,MEANING I GET A COMMISSION IF YOU DECIDE TO MAKE A PURCHASE THROUGH MY LINKS, AT NO COST TO YOU. PLEASE READ FULL DISCLOSURE HERE

If you are wondering how much YouTubers make, the short answer is TONS of money.

Let’s first take a look at the top 10 highest earning YouTubers in 2019, according to Forbs:

At the NO.1 spot is a 8 year old kid who posts videos of him unboxing different kinds of children’s toys.

Can you believe that even 8-year-olds can make millions of dollars online by simply uploading YouTube videos of him playing with toys?!

When I first heard of this, I remembered saying to myself, “Why didn’t I think of starting a YouTube channel with my son?”

It’s not too late to start because there is always a market for kids’ videos.

As a parent, kids’ videos are a life saver for me whenever I want to have a peaceful time.

If you have kids, you will understand what I am talking about;)

As you can see from the screenshot above, his YouTube channel has a total of about 24 million subscribers.

When it comes to making money with YouTube, it is all about video views and the size of your following.

The bigger your following, the more video views and the money you can make.

Now, we know that kids videos are one of the most profitable niches on YouTube.

What other niches are profitable?

Out of the top 10 highest paid YouTubers, about half of them are in the gaming niche.

It’s not surprising because, according to statista, the total number of video gamers in the world is estimated to be 2.5 billion in 2019 and it’s expected to grow steadily over the coming years.

Let’s take a look at how popular gaming related YouTube channel is.

That’s 103 million people who are interested in watching a guy playing video games and doing other funny review videos.

Before YouTube was invented, the only way to build an audience and get so much exposure was to have your own TV show.

First, not everyone can get to have their own TV show.

Think of keeping up with the Kardashians.

If you watch Game of Thrones, did you know that it costs 15 millions just to produce one single episode?!

Today, it has never been easier for ordinary people to create their own show and build a huge following in a way that was unimaginable just years ago.

And the best of all, it is completely FREE.

All you need to start a YouTube channel is internet access and a laptop or a phone with a web camera.

Now, you know that some YouTubers are making an insane amount of money.

So, how exactly do they make their millions?

There are a few ways that YouTubers make money.

One of the main income sources for YouTubers is advertising.

If you watch YouTube, you’ve definitely seen the annoying ads that show up before a video starts to play.

Did you see my favourite two words “Skip Ads” that the red arrow pointing to?

Generally, advertisers (i.e. the companies paying for the ads) will choose from the following ads cost models:

CPC refers to the cost which advertisers pay whenever the viewer clicks on the ads.

Generally, CPC is much higher than CPM because only a small percentage of viewers will actually click and interact with the ads.

On the other hand, CPM is the ad cost per a thousand impressions.

If your CPM is $10, that means, for every thousand viewers who watch your ads, you pay $10 to YouTube which, in turn, share the advertising revenue with Youtubers.

The main difference between CPM and CPC is that, regardless of whether the viewer clicks on the ads or not, the advertisers will get charged for the ads if ads watch time meets the specified requirement.

Let’s look at an example below.

This is one of the latest video uploaded by Ryan, the highest paid 8-year-old YouTuber.

This ads shown before his video is called a “skippable video ads”.

And the advertisers will only be charged if the viewer watches the video ads for 30 seconds (or the full duration of the video ads if the ads is shorter than 30 seconds).

Now, let’s take a look at the statistics of this video.

In just a couple of days, it’s already had almost 3 millions views for this one video.

According to InfluencerMarketingHub, the average advertiser pays $7.60 gross per 1,000 views with most advertisers paying a CPM of between $4 and $10.

So, let’s assume the following:

Let’s not forget that ads might show up more than one time for the full duration of the video.

Also, this video will continue to get more views over time.

That means it will keep bringing ads earning for him.

His videos are his income-generating assets for life, just like dividend stocks but minus all the risk.

How awesome is that!

If you are interested to see how much ads revenue you can make with your YouTube videos, here’s a YouTube money calculator that you can use to crunch out some numbers.

If you have a huge following, big brands might reach out to you for sponsorship deals.

As he has more than 20 million subscribers who are interested in children’s toys, toy companies such as Hot Wheels & Fisher – Price will want to work with him and get him to promote their latest toys to his audience.

Why are big brands willing to pay him tons of money to get access to his audience?

The reason is simple.

His audience are their exact target audience.

Plus, his audience are his loyal fans and trust his reviews.

When he recommends a toy, his fans will probably buy it.

That is why toy companies love to sponsor his videos because he can bring them a lot of product sales.

Now, how much can YouTubers get paid in sponsorship deals?

First of all, the rate for sponsorship varies, depending on a few factors.

Now, let’s use Ryan’s channel as an example again.

If you go through his videos, you will see him unboxing different kinds of toys.

Below, it’s a video of him reviewing a Hot Wheels’ Ultimate Garage Playset toy.

As of my writing today, this video has been viewed more than 6 million times.

Although I am not sure how much he was paid for reviewing this toy, I wouldn’t be shocked if Hot Wheels pays him 5 figure or even 6-figure for doing this video.

With more than 6 million views, Hot Wheels is effectively paying less than 1.6 cents per view which translates to a CPM of $16.

YouTubers can get paid much higher in sponsorship deals than ads revenue because most advertisers paying a CPM of between $4 and $10.

Now, if you are a famous YouTuber with a huge number of subscribers like Ryan, brands will be eager to reach out to you and offer you sponsorship.

But, many YouTubers don’t have a fan base as large as Ryan’s.

So, how do they find sponsors for their YouTube channel?

They find sponsorship opportunities through influencer marketing platforms which connect YouTubers with brands.

On Famebit, there are many campaigns posted by different brands.

As YouTube content creators, you can bid for a campaign that is relevant to your niche on the Famebit.

Once your submitted content is approved by the brand, you will get paid by Famebit minus a 10% fee.

#3: Sell Your Own Products

When you have built a large audience, you can also start making money by selling your own products.

Did you know that he also has his own line of toys, clothes and games?

Instead of promoting other people’s products to his huge audience, he can make much more money by selling his own products.

According to research, the global toys market is projected to reach revenues of more than $120 billion by 2023.

That’s a huge market to be in.

With his massive audience size, it’s very clever of him to capitalize on that by starting his own brands, just like Amazon and Walmart which also have their own brands.

So, whoever owns the traffic gets to make the most money.

Another new way for YouTubers to make money is through YouTube Premium program.

YouTube Premium is a paid subscription service that provides advertising-free streaming of all videos hosted by YouTube including exclusive videos at a monthly fee of $12.

How much you get paid depends on the number of video views and the total amount of watch time.

Below is a Redditor who is sharing his YouTube Premium revenue data.

This is much lower than the CPM you get in advertising revenue because most advertisers paying a CPM of between $4 and $10.

So, YouTube Premium is still lacking behind, compared with other revenue sources,

Best Tip To Making Money As A YouTuber

The best tip I have for anyone who wants to make money as a YouTuber is to be a prolific content creator.

The truth about making money as a YouTuber is that you have to be able to generate a lot of views for your videos because traffic equals money.

Now, how do you get a lot of views?

The secret is to churn out a lot of high quality and YouTube SEO-optimized video content on a consistent basis.

This kind of works the same way as blogging.

To make money with blogging, you have to get a lot of blog traffic.

One of the best ways to do that is to create a lot of high quality SEO-optimized blog posts on a consistent basis.

This way, Google will drive tons of free organic search traffic to your blog.

To keep it simple, there are only three things you have to do to get tons of traffic from YouTube:

Let’s look at an example now.

Our 8 year old YouTuber, Ryan, has been creating fun and interesting videos for kids ever since 2015.

As the top earning YouTuber, how often does he upload YouTube videos and how consistent has he been?

Below is the screenshot of the statistics for his latest videos.

If you look closely at his video titles, you will see a lot of keywords that are of a lot of interest to kids.

Here are some examples:

Last but not least, you must have an attractive personality that can turn one-time audience into lifelong fans because that’s how you can build your subscriber list and get stable traffic from YouTube.

Gladice Gong is an entrepreneur, blogger and business coach. She is passionate about sharing her ideas on business and personal finance on her blog.