DISCLOSURE: THIS POST MAY CONTAIN AFFILIATE LINKS,MEANING That I GET A COMMISSION IF YOU DECIDE TO MAKE A PURCHASE THROUGH MY LINKS, AT NO COST TO YOU. PLEASE READ FULL DISCLOSURE HERE

So, my husband and I tried out two products from Adam Khoo’s Piranha Profits.

One of them is Ultimate Investors Playbook by Adam Khoo and the other one is Options Tactics Playbook by his partner called Bang Pham Van.

How is our experience?

Is it really worth the money?

Let me share with you everything about our experience, so you can make an informed decision.

So, what is the Ultimate Investors Playbook?

It’s a subscription-based product where you can see one of Adam Khoo’s investment portfolios and the stocks that he invested in.

Every month, he releases a video to share with you what is happening in the market as well as his views on the market.

He always does technical analysis and tries to predict where the market might go in the near term.

I should have seen this as a red flag.

He considers himself a value investor who studies and reads about Warren Buffet’s investment philosophy.

But, did he not read the comments Warren Buffet has on technical analysis and predicting short-term market movement?

No one can predict the market in the short term and Warren Buffet does not look at price charts to make his investment decisions.

Also, according to Warren Buffet, no one can determine the fair value of a company with 100% certainty.

Yet, Mr. Adam Khoo gives its subscribers fair values of all the recommended stocks and recommends them to buy as long as it’s above the fair value.

Two of his recommended stocks are Alibaba and Ping An.

At the time that we joined, they were labeled as about 20% undervalued.

Did you know what was the share price of Alibaba at that time?

Then, as Alibaba continued to drop, it was labeled as a “FIRE SALE” and about 30% undervalued.

In the group chat, people were worried about their Alibaba stock position, but they were reassured by Adam Khoo and his bullish view of this stock.

I vividly remember that there was this subscriber.

He complained in the group that he sold his Tesla stocks and bought Adam Khoo’s recommended stocks, only to get stuck with losing stock positions and missed out on the huge rally in Tesla because Adam Khoo didn’t think Tesla was a good investment.

In the end, this subscriber decided to cut his losses on Alibaba, despite Adam Khoo telling his members that he is still bullish on Alibaba in the long term.

It turns out that this subscriber was right to follow his own investment decisions and NOT put blind trust in Adam Khoo.

Later on, Alibaba’s share price continued to drop another 50% to a low of about $80.

The sad thing is that most of the subscribers continued to believe in Adam Khoo and hold on to Alibaba stock.

The funny thing is that Adam Khoo continues to lower his fair value estimation on Alibaba from about $250 to around $160.

He should have warned his subscribers that it’s risky to buy based on his fair value estimation because it could be adjusted much lower later on.

The same thing happened with Ping An stock, another one of Adam Khoo’s Fire Sale stocks that he claimed was about 30% undervalued.

Below is the share price chart for Ping An. 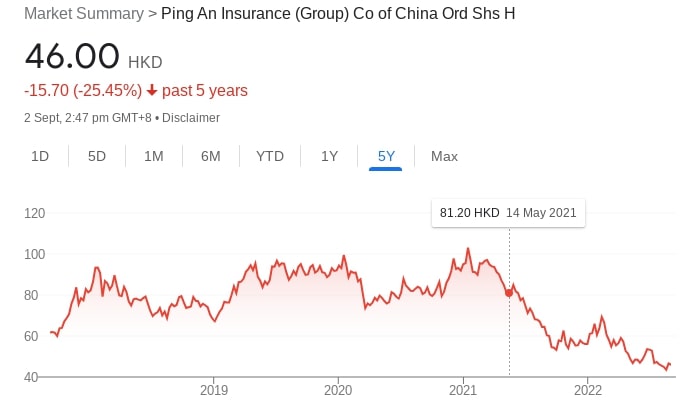 Many of his US stock recommendations also performed very badly.

One of his recommended stocks is Amazon.

When Amazon was around $150 in 2021, he said that it was a very good price to get in because it’s still below Adam Khoo’s fair value for Amazon.

Was he looking at the same share price chart of Amazon as I? 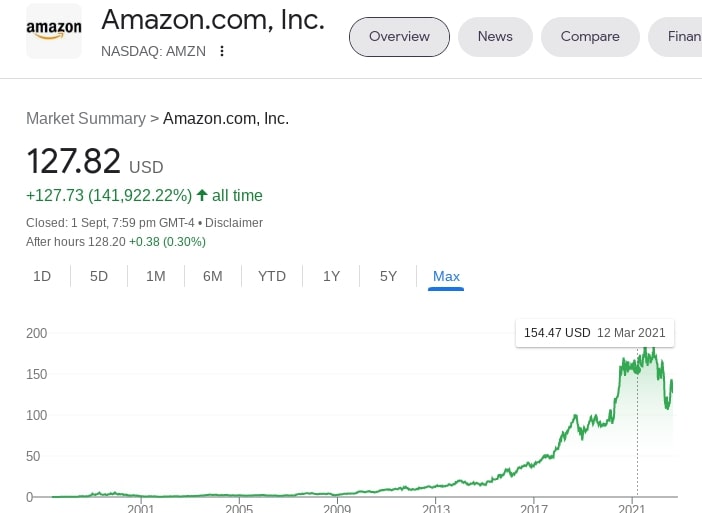 All I want to say is that he is a really really optimistic person, probably one of the most optimistic among all the people selling investment and trading courses online.

Hmm, it makes me wonder if being optimistic is the key to being successful in investing.

What happened to Warren Buffet’s margin of safety?

Most of Adam Khoo’s other stock recommendations suffered a huge loss in 2022.

The thing is that many of these stocks have very high P/E ratios and the Fed is expected to continue to raise interest rates.

So, the future does not look very rosy.

Yet, if you listen to him on YouTube, he has been calling a market bottom quite a number of times since May or Jun 2022 with his charts and data.

Yes, he finally got it right on the last one.

But, it is not THE market bottom but just a short rebound because the stock market continues to go down since mid-August.

Did I mention that he pulled out data to say that market would generally be up during years with mid-term elections?

For a person who claims to be a value investor, Adam Khoo has a habit of predicting the market in the short term with data and technical analysis.

He must have a very different definition of value investing from us. 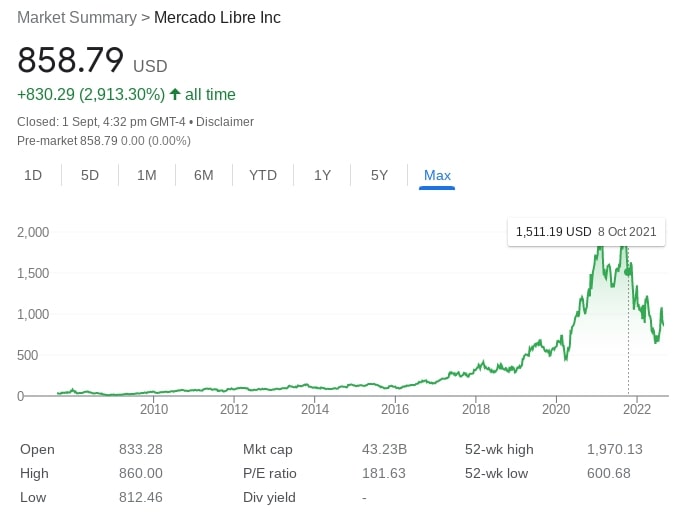 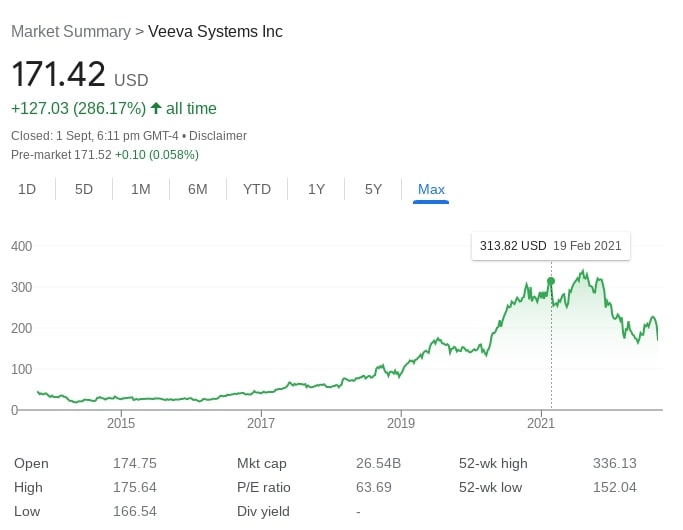 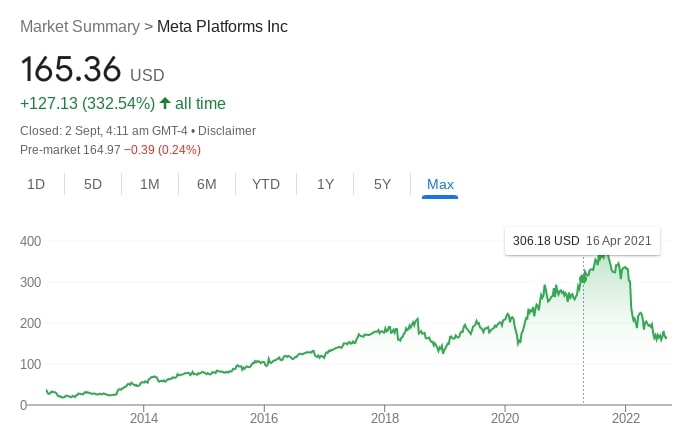 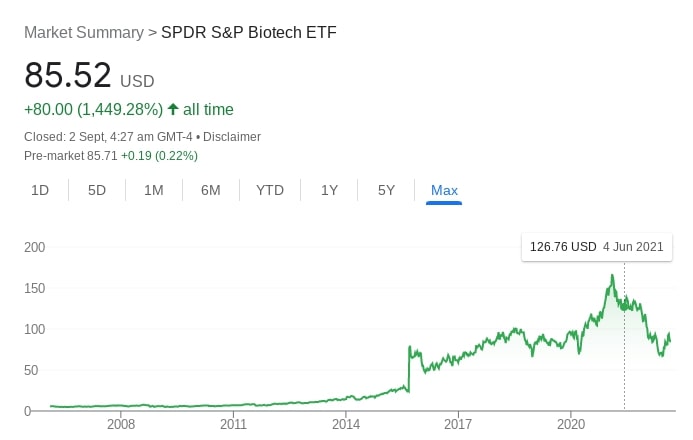 By the way, in 2021, a lot of economists and billionaire investors came on the TV and warned about high inflation and the stock market bubble.

The Fed even announced that it would start increasing interest rates in 2022.

What is common sense in investing during rising interest rates?

Overvalued technology stocks would most probably fall in price because their valuation would be lower when their expected future cash flows are discounted by a higher interest rate.

So, what did Mr. Adam Khoo say about Fed raising interest rates?

He released a YouTube video and pulled out charts and data to show that stocks could still go up even if the Fed increase interest rates.

Oh, did I mention that he said this in the last quarter of 2021 just before the market crashed in the first half of 2022?

Most technology stocks crashed close to 50% following his optimistic predictions of the market.

Giving bad investing advice on YouTube could cost a lot of people’s hard-earned money, especially if they choose to believe in you.

Is Adam Khoo’s Ultimate Investor Playbook Right For You?

If you are thinking about investing in the stock market, my recommendation is that you should either invest in stock market index ETFs or start learning how to invest and make your own investment decisions.

No one cares about your financial well-being more than you do.

After trying out Adam Khoo’s Piranha Profits Courses – Ultimate Investor Playbook, I don’t recommend his courses for the following reasons.

If he were really a good value investor, he would not have recommended his subscribers to buy overvalued technology stocks when there was high inflation and the Fed was going to raise interest rates.

He not only recommended them, but he also continued to predict that the market would go up.

So, subscribers who joined him in 2021 and 2022 mostly lost money following his advice.

The funny thing is that he started investing in the stocks many years earlier at a much lower price, so he would be looking at a smaller profit while his subscribers (who most likely not making as much money as him) lost their hard-earned money.

Trusting someone to make investment decisions for you is dangerous.

Because they make millions of dollars selling courses to you every year regardless of whether you make money or not following their advice.

So, the best thing you can do for yourself is to take control of your money and make your own decisions.

Secondly, after watching his video analysis of companies, I find that he is mostly pulling information and data out of the company’s annual reports and making simple comments on them.

That’s his so-called “deep-dive” into the recommended companies.

I remember that he was analyzing “Ping An” in one of his videos and his analysis was nothing short of ordinary.

There is nothing unique or insightful.

One of his reasons for buying Ping An was that one of his friends knows the chairman of Ping An and confirms it should be a solid company.

Is that how you analyze and value a company?

I don’t see them giving free investment advice or trading advice on YouTube to get more people to buy their courses.

Great investors are mostly managing multi-million or even billion-dollar funds and getting interviewed on CNBC or Bloomberg.

Gladice Gong is a personal finance writer and stock trader with many years of experience working in the financial industry.

Disclaimer: The content provided is for informational purposes only. Earnmorelivefreely.com is an independent platform. While we are independent, we may be compensated for advertisements, sponsored products, or when you click on a link on our website. The contributors and authors are not registered or certified financial advisors. You should consult a financial professional before making any financial decisions.